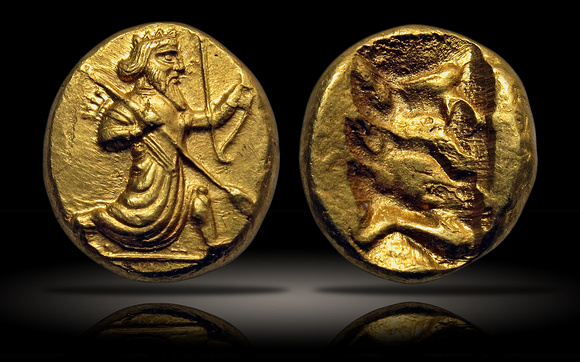 The Wealth of the Persian Empire

Thanks to intelligent political leadership and forward-thinking approaches to governing, the Persian Empire quickly became a substantial power of the ancient world. By not interfering with local customs or religions and granting equal rights for all citizens as long as taxes were paid, the Persian Empire merged diverse lands and people and set the stage with concepts that would eventually represent some of the underpinnings of the Hellenistic and Roman Empires.

The Persians themselves traditionally relied on barter rather than coinage but upon their conquering of the Lydian Kingdom in the mid-sixth century BC, they quickly adopted the innovative concept of coinage. The Persians found themselves frequently in conflict with Greek city states and needed to employ Greek mercenaries who expected to be paid with coins, resulting in the demand for the production of a consistent coinage.

Not wanting to retain the designs of the defeated Lydian King Croesus, the Great King Darius I transitioned the Lydian gold stater into a new denomination, the “daric”, named after him. The Greeks would often colloquially call these coins “toxotai”, archers, after their iconic design.

The daric became the first ancient gold coin to enter into widespread, international use and was one of the most recognizable coins of the ancient world, including being the earliest coin mentioned in the Old Testament.

The Persian King is depicted in a “running kneeling” position which represented an early approach for portraying motion on coinage. The core design remained largely unchanged for the 185 years during which darics were minted, emphasizing the conservative nature of the type.

The Persians put a focus on the purity of the metal - between 98-99% gold - rather than the artistry of the coin. This resulted in the vast majority of darics being of a very crude style. However, some rare examples like this one are elegantly engraved in a fine, naturalistic style, showing a significant improvement in the depiction of the king thanks to a brief artistic recovery.

Alexander the Great conquered the Persians in 329 BC but the daric would outlive the Empire, continuing to be struck under Alexander and his successors until it was eventually fully replaced by Alexander’s stater around 300 BC.