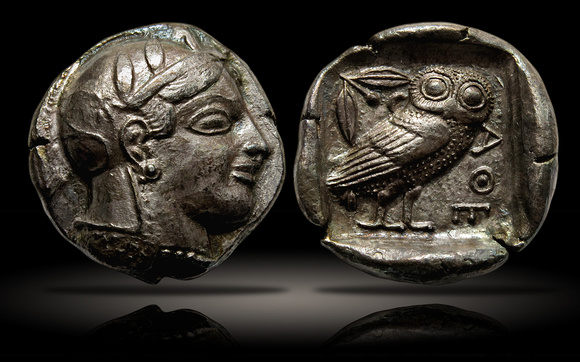 The Most Famous Coin of Antiquity

Athens was a great military power in ancient Greece and is considered the birthplace of Western civilization and democracy. After defeating the Persians at the Battle of Marathon in 490 BC, Athens was brought into a golden age.

During this period of prosperity, Athens expanded its political and economic influence throughout the Greek world, allowing artistic and intellectual progress to flourish at a rate which has never been matched. Their military and naval strength was aided significantly by their influx of funds from the mining of silver at Laurion, as well as the combined resources from the Delian League, which Athens now led.

The quantity of silver controlled by the Athenians allowed them to mint the authoritative coinage of ancient Greece, the thick and heavy Athenian “owl” tetradrachm, which remains the most recognizable ancient coin today. This coin was the largest silver coin of its time, and it popularized the use of a coin’s obverse as the “head” and the reverse as the animal’s “tail”.

They were produced for over four hundred years, and while the artistic style changed over time, the theme remained consistent, showing Athena, the goddess of wisdom and warfare, on the obverse and an owl, her patron animal, on the reverse. This consistency reinforced their international message and came to symbolize Athens’ economic power.

Mintage of the first archaic type of Athenian owls started around 512 BC and continued through the early fifth century BC. These early coins were very crudely designed and generally of poor quality. The style transitioned quickly over the next few decades, becoming more refined and artistic, reaching a peak around 460 BC. In 449 BC, during the early Classical period of Greek art, the designs were revised again and production increased exponentially to keep up with the demands from large building projects and the funding of the Peloponnesian War, which started in 431 BC. These later coins are orders of magnitude more common than the earlier issues, and this prevalence allowed Athens to flourish.

Athenians treated their coinage not only as means for facilitating commerce and spreading their political imagery, but also as a business, making a profit on each Owl minted.

The value of a tetradrachm was too high for daily transactions, but they were used for building projects, large commercial transactions, international trade, and payment for war preparations. Through careful control, their tetradrachms became known to be of great metal quality and consistent weight, resulting in merchants from other cities using them for their portability and global acceptance.

While the Aegina "turtle" was the first coin to be widely accepted internationally, the Athenian Owls were minted in far more substantial numbers and traveled farther throughout Greece, resulting in them becoming the world’s first ubiquitous trade currency.

The obverse portrait of their patron goddess Athena is depicted in an interesting combination of femininity and intimidation through the presence of the war helmet, showing both sides of Athena’s character. She was often described as “flashing-eyed”, so it is likely that the archaic depiction of her large, almond-shaped eye was intentional and had mythological origins.

The Greeks did not consider birds to be divine, but many became the symbolic animals of various gods. The species depicted on the reverse of the Owl tetradrachms has been identified as “Athena Noctua”, the Little Owl. They are found in the Mediterranean region and stand only six to eight inches tall, weighing between 2.5 and 4.5 ounces.

The inscription "ΑΘΕ" is an abbreviation of ΑΘΕΝΑΙΟΝ, “of the Athenians”. These coins were so popular that they were often copied by other countries, they retained this inscription with the hope of having their currency associated with the positive qualities of the genuine Owl tetradrachms.

The reverse of these coins features an olive sprig, referring to olive oil, one of Athens’ primary exports, as well as ironically acting as a symbol of peace on coins which were often used to fund wars. A crescent shape, possibly a waning moon, is shown on most issues, but its meaning isn’t clear. Many speculate it represents the time during which the nocturnal owl is most active, or perhaps to denote Athens’ famous nighttime naval victory over the Persian fleet at Salamis.


Athena’s profile is depicted with a simplistic grace and an enigmatic archaic smile, with a more natural eye and feminine portrait than the other issues, topped with a naturalistic floral design on her helmet. The reverse shows an exceptionally detailed, impressively lifelike owl with three separate tail feathers, a key attribute which distinguishes the earlier issues from the massive emissions that followed.

In addition to their stylistic evolution, the fabric of Athens tetradrachms changed significantly over time, eventually flattening and broadening out into the “New Style” tetradrachms which were minted in the second century BC.

The Classical tetradrachms of the fifth century BC were made on condensed flans, often with a worn, convex obverse and the reverse owl struck in high relief. When well-centered, the owl is shown within a deep concave frame as a result of the shape of the die. The obverse design is often too large for the coins and the crest of Athena’s helmet is usually not shown. The high relief dies also often result in edge splits when struck, due to the force and high metal temperatures involved in the minting process.

This particular coin is an early “transitional” tetradrachm, part of a group of coins minted from the late 470s through to the early 450s BC, around the same time as the famous Athenian decadrachms. These issues are considered the pinnacle of artistic style in Athenian coinage and many note them as among the most attractive of all Greek coins. President Theodore Roosevelt kept an owl tetradrachm in his pocket and was inspired to order the redesign of the U.S. coinage in the 20th century.

This coin was introduced in the “Pentecontaetia”, the “Fifty Years”, from 479-431 BC during which Athens’ force strengthened, turning it into an imperial power capable of standing against Sparta and her Peloponnesian allies. Stylistically, this coin is dated to the earlier part of this period, followed by a few subsequent changes before the large emissions. Dated 465-462BC, it was likely issued to pay for the Athenian campaign to conquer Thasos in 463 BC.