Home»The Glory that was Greece 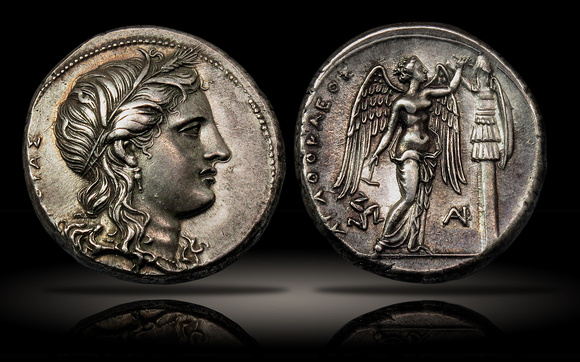 Agathokles was the last of the larger-than-life rulers of Syracuse, but he was not merely given the right to the throne. He was born in Thermae in 361 BC to a Greek manufacturer of pottery, but he quickly tired of his father’s trade. Upon leaving home and moving to Syracuse, he became an officer within the army, establishing himself as a skillful leader.

In 317 BC, he overthrew the Syracusan rulers, banishing or murdering all of those who opposed him and, with the support of the common people, inserted himself as dictator.

He formed a large navy and strengthened his army, significantly expanding the power of Syracuse. This growth caused his territory to bump against that of the Carthaginians, a force which would shape and consume the majority of his life.

Carthage controlled a large territory in western Sicily and had been enemies of the Sicilian Greeks since the 6th century. Their forces posed a formidable challenge for Agathokles, and after a bloody battle, the boundaries were largely unchanged, with a border established along the Halycus River.

In the summer of 311 BC, the Carthaginians managed to surround Agathokles by land and sea but his quick thinking allowed him to escape when, in August 310 BC, the Carthaginians briefly relaxed their naval blockade. Agathokles immediately sailed from the Syracuse harbor with 60 ships and an army of 13,500 men, set to invade Carthage itself. Although he defeated the Carthaginian armies in North Africa, he did not capture their capital city. Nonetheless, the strategic attacks were highly successful and widely celebrated.

Syracuse was maintaining its stronghold against the Carthagainians while Agathokles was at battle in Africa, but at the same time, he learned that his other cities in Sicily had claimed independence. This forced him to return to Sicily and leave his African army under the control of his son Archagathus.

The Carthaginians had split their army into thirds, each controlling a separate area. Archagathus did the same but not quickly enough, and several of his factions were destroyed by their forces. By the time Agathokles returned, there wasn’t anything he could do: Archagathus was killed, and the army was forced to surrender to Carthage.

Many of his soldiers were either recruited into the Carthaginian army or crucified. Agathokles made peace with the Carthaginians in 306 BC by giving up large territories in west Sicily in exchange for a fair amount of gold and grain.

This truce did not leave him idle. Following in the footsteps of the successors of Alexander the Great, Agathokles adopted the title of sole king of Sicily, although this control only extended across the eastern portion of the island.

He then extended his power to the Greek areas of southern Italy and western mainland Greece, and, in 300 BC, took over Corcyra by driving out the Macedonian king Kassander.

However, his hopes of extending his dynasty were brought to an abrupt end when his second son was murdered by a jealous relative. Agathokles then occupied his time working to consolidate the control over his empire. In recognizing that he had no formal heir, he restored the Syracusan democracy as he lay dying of jaw cancer at the age of 72 in 289 BC.

Although he did not accomplish all of his military goals in his lifetime, he did show that it was possible to invade Carthage, leaving the door open for the Romans to be much more successful in the Second Punic War in 202 BC.

This tetradrachm, from Agathokles’ second series of silver coins, marks the beginning of a deviation from traditional types. By the end of the fourth century BC, the designs of Syracusian tetradrachms and dekadrachms exclusively pictured the local spring nymph Arethusa. The design on this coin is of Persephone, in a complementary style and wearing similar earrings to Arethusa, in an attempt to unite the various Greek factions of Sicily under the new leadership.

Agathokles did not want to change the coinage too dramatically, considering how recognizable it was, but he still replaced Arethusa with the Sicilian goddess who would now show that he ruled the entire island. Whereas Arethusa was adorned with seaweed, Persephone is crowned with grain, paying homage to Sicily’s fame as the wheat-wealthy island of the Mediterranean. In Greek mythology, Persephone is the daughter of Zeus and Demeter – the goddess of grain and all of the fruits of the earth. Because of the similarities in design, the artists felt it appropriate to differentiate them by specifically engraving the name Kore, the common name of Persephone in Greek, meaning “the maiden”.

This coin was struck towards the height of Agathokles’ power and the proudly displays his greatest achievements. The reverse shows a gracefully standing, winged figure of Nike - the goddess of victory - putting the finishing touches to a military trophy constructed from the spoils of the war against Carthage, alluding to his successful invasion of Africa. Interestingly, this type is stylistically similar to another issue by Seleukos I, minted at the eastern end of the Greek empire, but it is uncertain which served as the basis of the design for the other.

This coin was part of the Hunt collection, one of the greatest collections assembled in the twentieth century, and was last available to the market in 1990. It is a delicately and attractively toned example, designed with dies of the finest style, believed by most to be the finest known example.