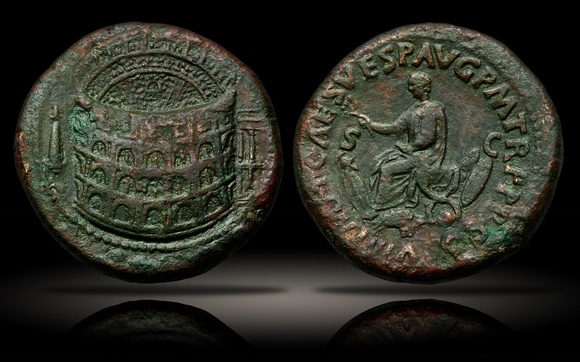 Inaugural Games at the Colosseum

This impressive coin was minted to commemorate the inauguration of the Colosseum and was likely personally distributed by the Imperials to key spectators. It depicts the most famous landmark of Ancient Rome: the Colosseum. The name “Colosseum” originates from a massive statue of Nero (a “Colossus”) which stood nearby; its true name is the Amphitheatrum Flavium, named after the emperor Vespasian of the Flavian dynasty, who began its construction in 71 AD. The scale of the Colosseum was not matched for another 1,800 years.

Shown on the left of the coin is the Meta Sudans, a huge, conical fountain and, on the right, the famous Baths of Titus. One can see tiers of spectators within and a central arch which represents the Imperial Box, all carefully engraved from a bird’s-eye view.

The Colosseum stands on top of the prior location of Nero’s Golden Palace. In building the Colosseum, Vespasian was working to distance his reign from Nero’s self-indulgence and instead create a building for the enjoyment of the population of Rome. With 80 entrances and the capacity to seat more than 50,000 people, it was the first of its kind architecturally and instantly became one of the best known buildings in antiquity.

Its core was constructed of concrete, with marble floors around the best seats and tile in the less expensive sections. It had a retractable canvas roof on the fourth level, and its floor was made of heavy timber, covering an elaborate series of underground cells for gladiators, prisoners, and animals. Amazingly, the floor could be removed and the lower levels flooded for naval combats.

Engraved and minted immediately following its completion in 80 AD, this type is the most accurate, original depiction of the Colosseum in any medium. Various minor changes were made by later emperors until it was severely damaged in 217 by lightning. Elagabalus and Gordian III worked to restore it, completing the repairs in 244. The Colosseum was used for hundreds of years, surviving a series of earthquakes in 442 and 470, with additional restorations completed in 523 by the Germanic conquerors of Rome. However, after an earthquake in 847, no further attempts to restore it were made, and it remains in the same state today.

A dedicatory inscription was discovered in 2001 which reads, “Imp T. Caes. Vespasianus Aug. Ampitheatrum Novum Ex Manubis Fieri Iussit”. This translates to “The Emperor Titus Caesar Vespasian Augustus had this new amphitheater erected with the spoils of war”. This finding matches well with the depiction of Titus on the reverse of the present coin, shown as the master of the world, with his curule chair sitting on top of the globe, bringing peace with an olive branch by being victorious over their enemies (shown as captured arms).

Upon its completion and inauguration, Rome celebrated with 100 days of festivities at the Colosseum, including gladiator battles, recreations of famous victories, and hunts of exotic animals.

The obverse die continued to be used after the death of Titus, but this particular coin was part of the earliest commemorative issue. These coins were as loved in antiquity as they are now, and most are found heavily worn, likely because they were held as pocket-pieces by the Romans, showing their pride for attending the first games.

As one of the few examples available to private collectors, this coin represents one of the rarest and most exciting Roman artifacts.