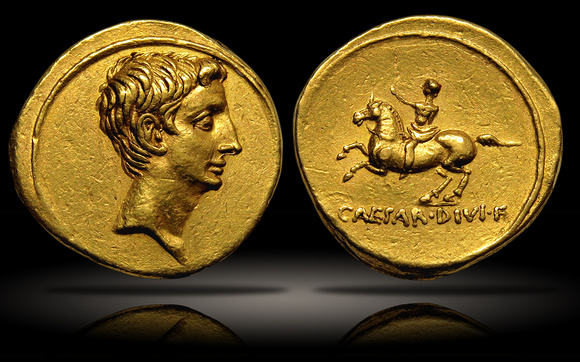 The Battle of Actium

Octavian was the son of Julius Caesar's niece and Caesar himself sponsored his introduction into public life when Octavian accompanied his uncle in his triumph over the Spanish in 46 BC. Octavian was only twenty years old when he learned of Caesar's assassination. Caesar had adopted him as his son posthumously, and Octavian returned to Italy from his studies broad in Greece with a strong desire to avenge his murder.

He leveraged his association with Caesar to gain the confidence of the troops, and the Senate eventually granted him a consulship. In 43 BC, he formed the Second Triumvirate with Marc Antony and Lepidus. They defeated Brutus and Cassius and divided the empire into areas of operational focus, with Octavian holding most of the West and Antony the East.

Antony grew progressively closer to Cleopatra while Octavian worked to restore Italy. In 33 BC, the Second Triumvirate ended, leaving Antony without any legal authority. Octavian then began a campaign against Antony, declaring war against Cleopatra.

Octavian’s admiral Marcus Agrippa held Antony’s fleet back in the bay of Actium in Greece, slowly causing Antony’s men to lose faith in his leadership. On September 2nd, Antony and Cleopatra managed to escape and break free, accompanied by only a small squadron, leaving the rest of his men to surrender to Octavian. Antony fled to Alexandria, and he and Cleopatra eventually took their own lives in August, 30 BC after being cornered by Octavian; this marked the end of the Roman civil wars in a complete and devastating victory.

Rome was officially transformed from a Republic to a Principate in January, 27 BC with a final and peaceful revolution. Octavian made an offer to resign from all of his offices, but the Senate refused, recognizing his leadership as indispensable to the stability of Rome. The Senate bestowed upon him a multitude of honors, including the new name, “Imperator Caesar Divi Filius Augustus”, most commonly referred to as simply “Augustus” – “The Revered One”.

Octavian renounced his old name, which was associated with his military power, and only used “Augustus” moving forward, focusing on its connotations of rule with the consent of the governed populace. The name Augustus was assumed by all of his successors as the mark of imperial rank. Over the next forty years, Augustus shared his authority with the Senate, only retaining the powers he truly needed, leaving most of the prestigious traditional offices available to others who desired public careers.

The aureus as a denomination dates back only to the time of Sulla in 80 BC and had historically been infrequently issued and rare. Worth one hundred sestertii, the aureus represented a very large sum of money, and its use during the Republic and Imperatorial period was primarily for military purposes, struck by traveling mints under the authority of the field commander. The earliest aurei became the standard gold denomination of Rome for the next four centuries. Starting at 10.80 grams, 30 pieces to a pound of metal, the gold weight would be debased many times throughout Rome’s history. This debasement began only a decade after Sulla when Pompey issued aurei at a weight standard of 9.00 grams, 36 pieces to a pound.

It would not be until Augustus’ coinage reform in 23 BC that the aureus would come into standard, consistent use. In addition to his reorganization of the state and institutions of Rome, Augustus introduced a formal system of fixed ratios between denominations of coins.

Initially, the names of the magistrates responsible for minting the coins, the triumviri monetales, were included on all of the coins in all metals as a sign of respect. This also helped reduce the confusing political influences which had been affecting the coins during the late Republic.

This coin, however, predates the reform, dating to 32 BC, when he was still referred to as Octavian. This type was Octavian’s counterpart to Mark Antony’s famous “legionary” series and was among Octavian’s final issues prior to the Battle of Actium, likely struck to fulfill the financial needs in anticipation of the inevitable confrontation with Antony and Cleopatra.

The obverse style shows a portrait with significant aesthetic sensitivity compared to his other depictions. It has been speculated that this was a deliberate attempt to assimilate his features with those of the beautiful god Apollo, whom he had adopted as his patron.

The inscription on the reverse of this coin puts it among his war coinage, minted for the payment of his troops during the Actian campaign. It reads “CAESAR DIVI F”, proclaiming Octavian as the “Son of the Divine Julius”, having been adopted by Caesar as his son and made his heir by his will.

The reverse promises peace not only from Octavian’s victory at Actium, but also from the annexation of Galatia and the subjugation of Spain. As this aureus predicts, his reign did indeed give Rome a “golden era” known as the “Pax Romana” (Roman Peace) during which he served for 41 years.

Interestingly, this coin repeats a type which had originally appeared on a denarius from 41 BC. The representation of Octavian likely depicts the statue which had been erected in Rome to honor his participation in the battle of Philipi, showing Octavian on horseback raising his right hand in salute to his troops.

This coin has a storied history, residing in some major collections as well as the honor of being published in several reference guides: