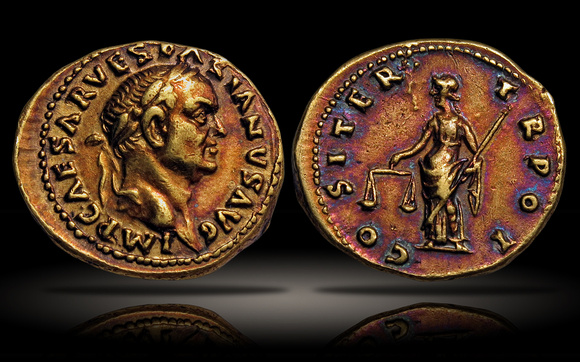 Mt. Vesuvius began erupting on August 24, 79 AD and continued for two days, burying the Roman settlements of Pompeii and Herculaneum. There were warning signs: small earthquakes started a few days earlier, but small tremors were frequent in the area, so they were not heeded as indicative of an imminent threat. In the afternoon on the 24th, the eruption began, shooting a cloud of ash twenty miles into the air and throwing molten rock at a rate of a billion pounds per second. 80% of the residents of Pompeii managed to escape in the first day to neighboring villages. By the evening on the 25th, the flows of lava began, covering the area in nine feet of ash and molten rock, and the 2,000 people who remained, hoping to wait out the disaster, ultimately perished.

Among those who escaped was the owner of Villa Pisanella, a popular wine producing villa rustica on the south eastern slopes of Vesuvius near the modern-day village of Boscoreale. It is believed that the owner was Lucius Caecilius Iucundus, a wealthy merchant who was the highly successful son of a freed slave.

The soil around volcanoes is highly fertile and great for growing crops, allowing the owners to amass significant wealth. In 1895, excavators uncovered 109 gold and silver plates and hundreds of gold aurei. The coins were stored in an empty cistern in the wine cellar of the villa when the owner fled. With a general exchange rate of one aureus as pay for one month of work, this amount of gold would constitute a lifetime of profit.

These coins are known as “Boscoreale” aurei because of the distinctive toning found on many of them. Gold itself is inert and does not tone, but when made into coins, it is alloyed with small amounts of silver and copper which are susceptible to toning. Over the 1,800 years that the coins spent buried beneath the ash and pumice from Vesuvius, some examples developed significant toning. Because of the highly sulphuric atmospheric conditions in the area around Pompeii, some other coins from the region have more subtle toning, but the most vibrantly toned are clearly from within the original group.

This particular coin was minted by the emperor Vespasian, the son of a businessman and tax collector. He befriended various influential Romans and was eventually appointed as Proconsul of Africa in 63 AD. After the civil war following Nero's death, Vespasian defeated Vitellius, becoming emperor. He spent most of his reign rebuilding Rome's economy and expanding its borders. He is perhaps best remembered for starting construction of the Colosseum, a massive undertaking intended to give back to the people of Rome what had been taken from them under the reign of Nero.

The emperor is shown on the obverse of this coin, and reverse depicts Aequitas, the Roman goddess of justice, holding scales and a scepter. It has an extensive pedigree, including the legendary Biaggi and J.C.S Rashleigh collections, and is the plate coin in the Calico reference guide.