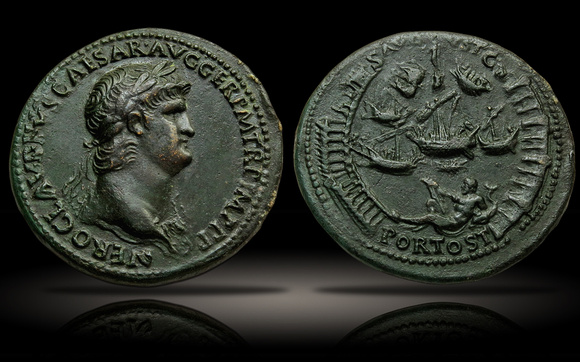 We often marvel at the efficiency of our modern world’s ability to transport objects across vast distances accurately and quickly. While not as interconnected as we are today, the ancient world had similar requirements, needing to move food and material to keep society operating.

At its peak, the city of Rome was home to more than one million people, generating a substantial demand for imported goods. A large portion of this transportation occurred on land along the empire’s well-known highways, but even more arrived by ship through port cities.

Ostia, meaning “mouth” in Latin, was Rome’s first colony in the 7th century BC and the primary port in Republican times. Located at the mouth of the Tiber River, Ostia was conveniently located to facilitate the easy delivery of goods to the empire, but it had some fundamental limitations due to sandbars which prevented large ships from entering. This meant that goods needed to be distributed to smaller ships capable of passing through: an inefficient process which produced significant contention.

Additionally, although they were absolutely essential to all major inland cities, ports and harbors were some of the most challenging of all engineering projects, requiring immense funds to build and even more to maintain.

Both Julius Caesar and Augustus wanted to extend and improve the port, but the expenses were astronomical, and it wasn’t until Claudius’ reign that the empire undertook the project. In 42 AD, a constant problem with grain shortage produced a tipping point to force the creation of an artificial harbor at Ostia. This new harbor would support year-round deliveries on top of military improvements, transportation simplification, and streamlined trade.

The design was a semi-circle, ambitiously surrounded by two large stone walls in the sea that were used as a breakwater and to help protect the harbor. New docks were excavated to the north along the Tiber and connected to the harbor by two canals. As part of the building process, one of Caligula’s ostentatious pleasure barges was sunk by being filled with cement. The entire port was adorned with marble and beautifully constructed, filled with magnificent frescos and statues.

The building project was a massive undertaking and mentioned by many ancient authors. Construction was finally completed under Nero in 64 AD. When projects of this magnitude were completed, it was cause for celebration. Not only did the Port of Ostia guarantee an improvement in Roman life, it also reaffirmed their international renown as engineers.

The Port of Ostia sestertius is considered by many to be one of the most attractive coins struck by the Roman Empire, commemorating and celebrating the completion of this great new harbor.

Its completion came at an ideal time as Nero’s rule brought Roman coin engraving to new artistic heights. In the same year as the completion of the Port of Ostia, Nero issued a new monetary reform which reintroduced the denomination of the sestertius, which had been suspended since the reign of the emperor Claudius.

These coins provided a large canvas upon which the engravers could work creatively, designing wonderfully styled portraits and intricately detailed reverses depicting the many projects and successes of the empire.

This type shows an incredibly detailed scene of activity taking place within the harbor. The breakwater forms the perimeter of the coin, working to regulate the water to maintain a calm harbor. The porticoes of the pier on the left represent the warehouses and offices through which the city’s imported grain supply was passed, and on the right, the slips represent the docking areas.

There is some variety to the reverse dies of this type, with certain coins showing more ships than others. This particular coin shows seven ships, ranging from large commercial ships to small transport vessels. There is a stunning level of detail, even down to the minute human figures busily manning the ships and furling sails.

At the top of the coin, a statue of Neptune, the god of the sea, watches over the harbor from atop a lighthouse. There are two ships entering the harbor past the statue, the left under full sail and the right with a number of sailors visible, standing on the decks with their oars drawn. In the center, a large ship is depicted with sailors furling the sails, one on the deck to the left handling the ropes, two on top of the mast, and one climbing the rigging to the right.

To the left, one can see two ships tied up at the docks with their sails furled. On the lower ship, a gangplank is shown reaching from the ship to the dock with many figures crossing over to the dock. On the right is an additional large sailing ship with sails furled.

The smallest ship closest to the entrance of the river Tiber at the bottom of the coin has oars in the water for greater maneuverability within the harbor. Powered by a small crew of six to eight men, this boat is likely one of the vessels used to ferry offloaded goods up the river to Rome.

At the entrance, a large, wonderfully designed reclining statue of the god of the river Tiber is shown holding a rudder and a dolphin.

Even with the flexibility the large size of the coin provided, the engraver clearly faced restrictions in its execution. Both accurate and abstract representations of various elements of the harbor are shown within the coin. The different sizes of the statues on either side of the harbor are shown in perspective but some artistic liberties are taken with the design of the pier, shown wrapped around the coin with the primary consideration being a design which looks pleasing within a round and limited space.

Despite the well-executed development of the Port, the harbor still eventually silted, recreating the original conditions of sand deposits which it was designed to circumvent. Between earthquakes and a malaria epidemic in the surrounding area, Ostia needed to be abandoned and the last remaining inhabitants were relocated in 800 AD.

The marble from Ostia was eventually reused in the cathedrals of Pisa, Florence, Amalfi, and Orvieto. The Leaning Tower of Pisa was built entirely of material from Ostia. The ruins and frescos are still magnificently preserved and the circular design of the port has been an inspiration for many large projects, including Michaelangelo’s construction of St. Peter’s at the Vatican.

Its innovative design served the Roman Empire for hundreds of years, and the Port of Ostia truly deserves the accolades given to it today and our admiration for its depiction on this famous sestertius.