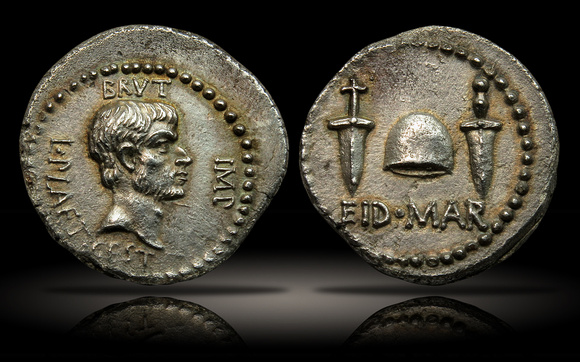 Beware the Ides of March

The “Eid Mar” denarius was minted by the assassin himself, Marcus Junius Brutus, to commemorate the date. It marked the final chapter of the Roman Republic, leading to its replacement by an empire which lasted for nearly 1500 years and whose influence and legacy shapes our world today. Had Caesar not been killed, the ramifications would have likely resulted in a dramatically different history of the modern world.

It is the only Roman coin which mentions a specific date (EID MAR) and loudly proclaims that the tyrant Julius Caesar is dead and that the deed was done in the name of liberty, as Brutus considered his assassination of Caesar to be an act of patriotism.

This was so remarkable that it became one of the few coin types to be mentioned by a contemporary historian. The ancient scholar Dio Cassius spoke of it in his History of Rome: “Brutus stamped upon the coins which were being minted his own likeness and a cap and two daggers, indicating by this and by the inscription that he and Cassius had liberated the fatherland.” (XLVII.25)
© Colosseo Collection
User Agreement
Cancel
Continue