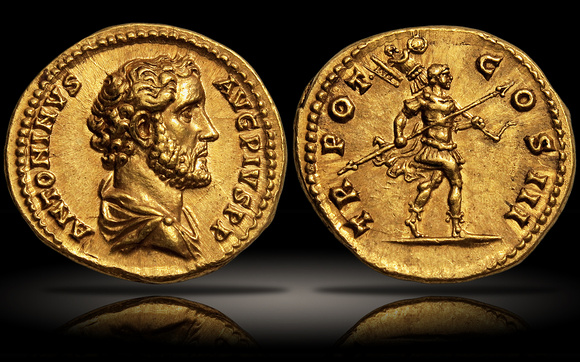 Antoninus Pius - Rome at its Finest

Antoninus Pius is remembered by history as a kind, just, and intelligent emperor. Having held the title for twenty-three years, the longest reign since that of Augustus, he had a great deal of time in office to make a lasting mark on Roman society. Unlike most of his predecessors, his legacy was not focused on military conquests; rather, his reign is often considered the most peaceful in the entire history of Rome. This was partly due to his preference for diplomatic solutions to conflict, dealing with issues predominately without the wide-scale battles of the other emperors.

This unique approach can likely be attributed to his upbringing. He was born into a wealthy family as the only child of Titus Aurelius Fulvius in Lanuvium, a city to the southeast of Rome, on September 19th, AD 86. His father and paternal grandfather died when he was young, resulting in him being raised by his maternal grandfather, Gaenus Arrius Antoninus, who was known to be a man of integrity and culture. Combining the wealth of both of his families, he became one of the richest men in Rome. Antoninus married Annia Galeria Faustina the Elder, a beautiful, wise woman who dedicated her life to caring for the less fortunate throughout the Empire.

Antoninus Pius was an “Adopted Emperor”, where succession was a conscious decision made by the current emperor based on merit rather than a birthright, which differed from the approach taken for the first Twelve Caesars. Antoninus established himself as a competent leader, moving up the ranks from quaestor, then praetor, and finally consul, after which Hadrian named him one of the four high judges with full jurisdiction over Italy. He was then given a proconsulship in Asia, followed by him becoming a member of the Imperial Consul, as a personal consultant to Hadrian.

After the death of Hadrian’s first adopted son, Lucius Aelius, on February 25th, AD 138, Antoninus was formally adopted by Hadrian when Antoninus was 51 years old. It was agreed that he would be made Emperor with the provision that he would in turn adopt Marcus Aurelius, the son of his wife’s brother, and Lucius Verus, the son of Aelius. Antoninus agreed and his two adopted sons would eventually succeed him as co-emperors following his death on March 7th, 161.

Upon taking office, his full title became “Imperator Caesar Titus Aelius Hadrianus Antoninus Augustus Pontifex Maximus”. Immediately after his ascension, Antoninus requested that the Senate deify Hadrian, to which they initially refused. Antoninus’ persistence in ensuring the divine rights of Hadrian, as well as the efforts he made to support his elderly father-in-law and to pardon wrongfully accused men who were condemned to death, resulted in the Senate bestowing the title of “Pius”, meaning “dutiful and respectful”.

He was involved in several projects, which included performing repairs to the Colosseum, the baths of Ostia, and aqueducts at Antium, as well as building a temple in the Roman Forum in his wife’s honor upon her death in 141 AD.

His humanitarian efforts were significant, and he was loved by the Roman people, who had become far too familiar with emperors stealing and imposing excessive taxes to fund their own eccentricities. Antoninus was a level-headed man, not given to excess, in addition to a possessing a sincere desire for the well-being of his subjects. He protected Christians from persecution and used large portions of his extensive private treasury to assist distressed areas of his empire. While other emperors were quick to judge and resorted to executing those who appeared to conspire against them, Pius instead used these events to demonstrate his understanding and leniency.

While Antoninus was known for his tight use of state funds, he did host a magnificent series of games, celebrating the nine-hundredth anniversary of the founding of Rome. He imported expensive animals, including a great number of giraffes, tigers, elephants, and crocodiles. This made him very popular with his subjects, but paying for it required him to debase the Roman currency by decreasing the purity of the denarius, dropping its silver weight from 2.88 to 2.68 grams.

Antoninus instituted some groundbreaking philosophies which have shaped our world today. He did not consider the often-rigid law immutable and instead used his own interpretations of equality to avoid unnecessarily harsh punishment. He passed laws to grant citizenship to slaves and to ensure their fair treatment, especially for children. He also created the concepts of “innocent until proven guilty” and that the trial of an accused person must be held where the crime had been committed. He created a charity named “Puellae Faustinianae” (Girls of Faustina), which helped orphaned girls. Additionally, he improved the grain supply to Rome, and lent money to the people and troops at the very low rate of 4%. He was a tall, handsome, well-spoken man whose actions were very well-fitting to his promises.

Unfortunately, Antoninus Pius died in his sleep at the age of 74 after what is believed to have been an accidental case of severe food poisoning. His successor Marcus Aurelius spoke very highly of Antoninus: “Remember his qualities, so that when your last hour comes your conscience may be as clear as his.” Appropriately, his last spoken word was when his guard asked for the password – “aequanimitas”, meaning equanimity – mental calmness and composure.

Struck in high relief, the obverse of this particular coin shows Antoninus Pius bearded in very fine style, draped and from the right. There are slight die cracks on the obverse, meaning the die was breaking while the coin was being struck, which is a good explanation for why this particular obverse is extremely rare.

The reverse type shows Antoninus as Romulus advancing right in military dress, holding a spear with points at both ends and trophy over his shoulder. This reverse has been used on sestertii where it is labeled “ROMVLO AVGVSTO” – “To the Augustan Romulus” and may be interpreted as depicting Antoninus as the re-founder of Rome, following in the footsteps of Augustus, marking a new era of Roman success and morality. Interestingly, several experts have commented that the portrait on the reverse bears some similarity to Trajan – Hadrian’s adoptive father – possibly alluding to the familial efforts of the Adoptive Emperors to improve Rome.

This coin is featured in the Calico reference guide (1650) as well as part of the Biaggi collection (coin number 761). The Biaggi collection featured an extensive set of Roman aurei, an almost complete set of every design from every emperor, with many coins being the finest known of their type. Leo Biaggi di Blasys formed the majority of the collection prior to 1950, and it was eventually sold by his surviving family in 1971.