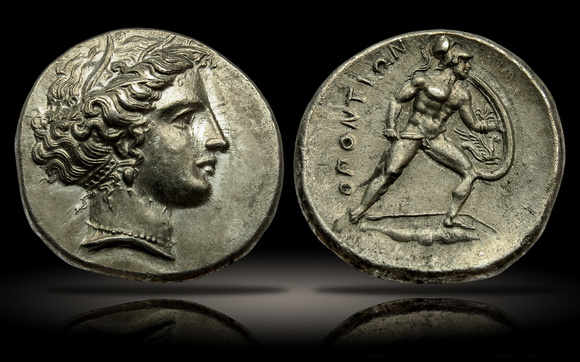 The Mythology of Ajax the Lesser

Opus was a small, infertile territory on the coast of mainland Greece, surrounded by larger, more powerful states. While their inhabitants, the Lokrians, made a relatively small impact in history, they produced a beautiful and extensive series of coins.

Mercenaries returning home after the Peace of Antalkidas in 387 BC brought considerable amounts of silver with them. These Syracusian coins represented their salary, thus providing the bullion and models for the coinage of their home city. It is likely that Lokris may have needed to produce new coins to pay for its military expenses in the continual conflict with neighboring Phokis during the Third Sacred War.

There are some varying opinions about who is depicted on the obverse. It is clear, however, that the inspiration was the Syracusian Arethusa heads of Euainetos. The general consensus for this particular variety is that the portrait is of Demeter, the mother of Persephone.

The reverse depicts the hero “Ajax the Lesser”, commander of the Lokrians in the Trojan War. The shield Ajax carries is particularly remarkable for having its decoration on the inside: there are some sculptural parallels for this, but it is a very uncommon attribute.

The Lokrian Ajax plays an essential role in Homer's "Iliad". He often fought side by side with his namesake, Ajax the Great, and led a strong contingent of forty ships to Troy. He is described as small, nimble, and a great javelin thrower, and he was counted among the heroes of the Greeks. However, he was considered arrogant and conceited, and because of this, he died by the hand of the gods.

After the capture of Troy, the king's daughter Cassandra fled to the Temple of Athena to plead for protection. Ajax the Lesser found her and, violating one of the core principles of ancient religion, dragged her from the temple, toppling the statue in the process. As punishment, during his return, Athena sent a major storm on the fleet of the Greeks, scattering the ships. Athena personally sank Ajax's own ship with a thunderbolt, but he nevertheless survived by clinging to a rock. He boasted that he had braved the wrath of the gods, but Poseidon, upon hearing this blatant display of hubris, split the rock with his trident, causing Ajax to drown. The rest of the Opuntians reached home with some difficulty but largely unscathed.

Despite his attitude, the Lokrians' faith in their national hero was so great that whenever their army prepared for battle, one place was always left open for Ajax, whose spirit they believed would stand and fight with them. They also annually honored the memory of their former leader by launching a ship fitted with black sails and laden with gifts, which they then set alight.