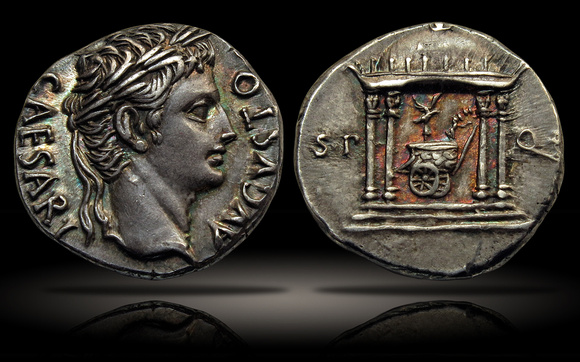 While fighting the battle of Philippi, Octavian vowed to avenge the assassination of his adoptive father Julius Caesar. Octavian set plans in motion to build a temple honoring the god Mars Ultor (“the Avenger”). Mars was the god of war, protector of Rome, and second only to Jupiter in importance. Caesar had stated earlier that he wished to build a temple honoring the god, but was assassinated before planning could begin.

With the help of Mark Antony and Lepidus, Octavian won the battle and upon assuming the title of Augustus, began planning for the temple to be built in the forum, stating that it would be “greater than any in existence”. This temple served a politically strategic purpose as well, further linking himself to the Roman people’s love for Julius Caesar by continuing and improving upon Caesar’s original concept. However, construction did not begin immediately due to an unstable political situation in the region.

Rome fought and lost to Parthia three times, the most devastating of which occurred in 53 BC. During this battle, Crassus, the leader of the Roman army, was killed and humiliated, and the standards of the Roman Legions were taken by the Parthians.

To the Roman military, the standard held deep symbolic significance and each legion would go to great lengths to protect their standard. The loss of a standard was considered a moral defeat and the Romans were known to sometimes spent decades fighting to recover them.

Upon the loss of their standards to the Parthians, the Romans fought back, seeking revenge. Julius Caesar and Mark Antony both attempted to reclaim the standards by force but failed due to heavy battlefield losses.

After ascending the throne, Augustus focused his attention on reclaiming the standards. Through his conquering of Armenia, he was able to secure a strong offensive position against the Parthians due to its proximity to their kingdom.

Even though he had a strategic advantage, Augustus didn’t want war with Parthia. However, the Parthian king felt threatened, proposing a truce to Augustus, offering to return the Roman standards and any surviving prisoners of war. Augustus agreed and the two superpowers avoided further bloodshed. Augustus hailed the return of the standards as a major political victory against the Parthians and used his coinage to celebrate the coup.

This coin is from the commemorative celebratory issues, with the reverse showing a reclaimed standard in a triumphal chariot within the Temple of Mars Ultor. At the time of its minting, the temple was not yet completed, taking at least ten more years to be built due to logistical issues. Augustus did not want to force the owners of nearby houses to move, so he needed to change his plans and purchase adjacent areas to accommodate his massive Forum.

When it was finally completed, the Temple of Mars Ultor was impressive. Modeled after the Temple of Venus but nearly twice the size, it was the focal point of the 8,000 square meter Forum of Augustus, built next to Caesar’s Forum.

The building became the official meeting room where the Senate would convene when decisions of war were required, as well as the departure point for commanders beginning their military service in the Empire.

Like the Temple of Venus, the Temple of Mars Ultor was built on a raised platform and lavishly decorated with fountains. Surrounding the temple were four-storey tall Corinthian columns, eight on each side, three of which still stand today.

The exterior was constructed in white marble and the interior flooring was laid with a mixture of colored marbles. The temple housed additional columns made of purple marble and a variety of statues, all adorned with extensive decorations and gilded rosettes.

Even though the Temple of Mars Ultor opened forty years after its conception, it was well worth the wait and represented an achievement in Roman engineering as well as epitomizing the grandeur and respect with which Rome treated its important gods.