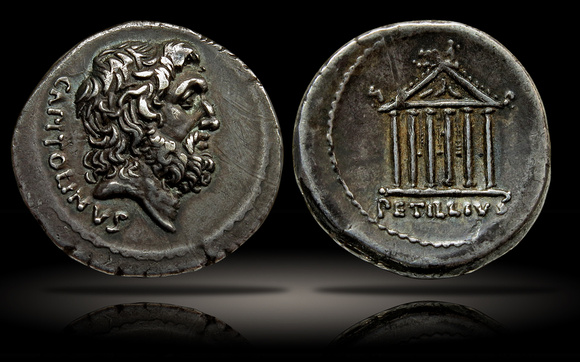 The Temple of Jupiter Optimus Maximus (the Best and the Greatest) was an incredible temple located on the Capitoline Hill at the front of the Roman Forum. It was unique in its function as both a military and civic space, serving as the primary location for all major religious and political events during the Roman Republic.

Construction of the temple began under the last Roman king, Tarquinius Superbus, and was completed during the first year of the new Republic in 509 BC.

The temple was dedicated to the Capitoline Triad, with each deity having a separate cella (inner chamber). Juno Regina was on the left, Minerva on the right, and Jupiter Optimus Maximus in the middle. Eventually, the temple became associated only with Jupiter, the Roman equivalent of Zeus and the highest of all Roman gods.

The temple burned down more than four centuries after its construction in 83 BC but was quickly rebuilt by Sulla and stood intact for the next two centuries, despite regular lightning strikes. The remains of the temple can be seen today in and around the Palace of the Conservators.

This coin was minted by Petillius Capitolinus in 43 BC, a moneyer whose family likely held a hereditary office connected with the Temple. Jupiter is shown on the obverse, in a portrait of enchanting beauty: the workmanship on this coin is thought by many to be the best die in the entire Roman Republican series.

The Temple of Jupiter is depicted on the reverse as it stood after it was rebuilt by Sulla. It was extensively decorated with ornamental antefix and many terra cotta sculptures, the most famous of which depicted Jupiter driving a quadriga placed at the peak of the pediment above the entrance.

Upon their first day in office and before departing for war, Roman magistrates made vows and sacrifices at the Temple. The Senate also began each year with a meeting at the Temple, and it marked the starting point of the annual “Ludi Romani”, a series of competitions and theatrical performances honoring Jupiter.

The Temple also housed Rome’s spoils from military campaigns, artifacts, and precious relics, including three thousand bronze tablets dating back to the beginning of the city containing the historic decrees and votes of the people.