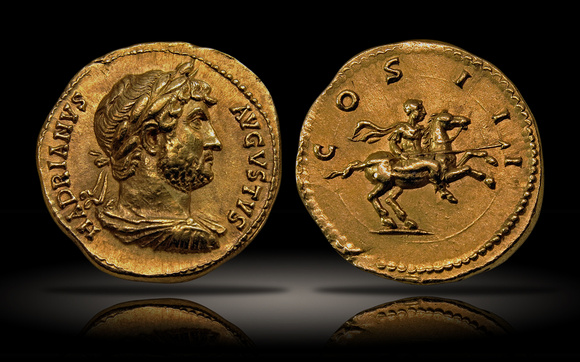 Hadrian was the third of the Five Good Emperors, reigning during the peak of Roman prosperity. His ascension to the throne was met with some controversy as his predecessor Trajan had not yet chosen a successor until he was on his deathbed. Trajan’s wife Plotina sent a letter to the Senate declaring Hadrian as the new heir, and only after the appointment was confirmed did she inform the Senate that Trajan had in fact already died, leading some to believe that Plotina took it upon herself to make Hadrian emperor.

Regardless of the manner in which he came to power, Hadrian had a very successful reign. He completed several famous building projects, rebuilding the Pantheon in Rome and constructing the Vallum Aelium (Hadrian’s Wall), which marked the northern border of Roman Britain.

Hadrian was known as a military expert, but his reign saw minimal conflict. He engendered trust with his troops by spending a considerable amount of time with them, wearing military attire and dining with his soldiers. He increased the vigilance of their training and improved the strength of Rome’s forces by personally working with the legions in the field.

He accomplished this through extensive travel, visiting nearly every province of the Empire while trusted members of his staff maintained Rome in his absence. He would inspect the troops and suggest corrections, as well as allocate funds for construction projects and improved infrastructure within each of the provinces.

As his health started to decline, Hadrian selected Lucius Aelius Caesar to succeed him. However, shortly before his ascension, Aelius died suddenly from what is believed to have been a brain hemorrhage. In his stead, Hadrian appointed Antoninus Pius with the provision that he would then choose Marcus Aurelius and Lucius Verus as his successors. Pius agreed, and the Golden Age of Rome continued.

Hadrian’s portrait on coins pays homage to his love of Greek art, shown with a noble profile in an idealized and attractive style. This coin depicts Hadrian wearing a full beard, a first for a Roman emperor. Hadrian was a follower of Stoic philosophy, and he adopted the Hellenistic fashion of philosophers and intellectuals by wearing a well-kept beard. However, some conflicting accounts say it was primarily intended to hide the unsightly facial scars Hadrian received in battle.

He was consistent in his bearded depiction on coins, departing from the precedent set by the Senate that Romans had to be shown clean-shaven. Much of the Roman upper class followed his fashion and wore beards up until the Severan dynasty at the beginning of the third century AD.

Hadrian focused on securing Rome’s borders rather than expanding the Empire, but he wanted to remind the public that he was equally capable at offensive strategies. Therefore, the reverse of this aureus was chosen to show the emperor as a successful military commander, conveying his strength by depicting him with a flying cape on horseback and hurling a lance.

The circle surrounding the emperor on the reverse is a “guide line”, used to properly align the dies. Its presence indicates a very early die state, making this one of the first coins struck with unworn dies. It is therefore fitting that it was featured as the representative example of the type in the Calico reference guide.