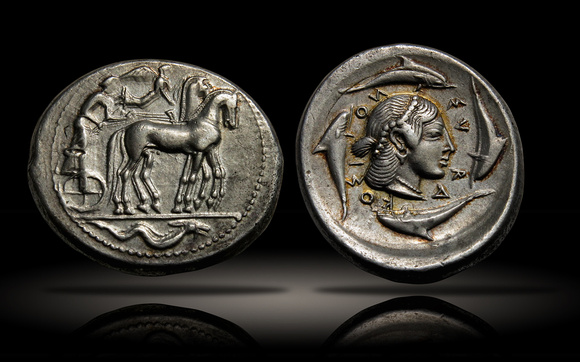 Hieron I assumed the throne in 478 BC upon the death of his brother, Gelon, the tyrant of Syracuse. Under Hieron’s leadership, Syracuse flourished with its influence extending into Southern Italy. A patron of the arts, Hieron opened his court to the famous poets and philosophers of the time, resulting in the city rivaling Athens in its cultural significance.

After Hieron’s death, his younger brother, Thrasybulos, seized power and ruled with an angry fist, executing prominent citizens and confiscating their wealth to pay his mercenary army. The populace rebelled and, with assistance from Akragas and Gela, was able to overthrow their leader, forcing Thrasybulos into exile. The newly re-founded, democratic government would stand for sixty years and continue to flourish.

With a dramatic shift in engraving style occurring shortly after the fall of Thrasybulos, it is very likely that this coin is one of the last issued under the Deinomenid dynasty, appearing deliberately archaized and closely patterned on the much earlier issues of Syracuse, with significant stylistic similarities to the famed contemporary Demaretion coinage.

The reverse features an early, archaic depiction of Arethusa, a beautiful sea nymph. According to mythology, while attempting to bathe in a river, the god Alphesus attempted to pursue her. She fled across Greece and Italy but Alphesus trapped her on a small island near Sicily. She prayed to Artemis to free her and he granted her request, transforming her into a spring around which the famous city of Syracuse was formed. Arethusa became the symbol of Syracuse and was featured prominently on its coinage in the fifth century BC, shown as a young woman surrounded by four frolicking dolphins.