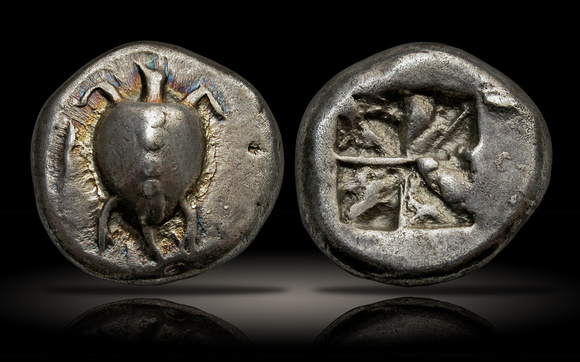 Aegina is a rocky and mountainous island in the Saronic Gulf located about twenty-five miles southeast of Athens. It was settled by the Dorians around 900 BC and was named after the daughter of the Greek river god Asopos.

Because of its limited availability of cultivable land, the inhabitants needed to leverage the sea for their livelihood. They became expert merchants and tradesmen, dominating the shipping industry early in the 6th century BC. Their success and near-monopoly brought the island great wealth and power. They built a lavish temple to their local goddess, Aphaia, decorating it with numerous sculptures of beautiful artistic quality.

During their travels, the merchants encountered the developing early electrum coinage in Ionia and Lydia. They recognized the potential to not only store their considerable wealth in the form of portable coins, but also to optimize trade through a global currency. Aegina therefore became the first of the Greek city-states to issue coined money, starting in the mid-6th century BC.

In addition to the silver they received in trade, Aegina worked the mines of the silver-rich island of Siphnos, which were at the height of their production as Aegina was flourishing.

The emissions from Aegina were substantial, resulting in their weight standard becoming dominant throughout much of Greece in the 6th and 5th centuries. The Athenians called the Aeginetan drachm the “thick drachm” as it was heavier than that of Athens, with their common didrachm “stater” coinage weighing about 12.6 grams.

Their status as the first international trade currency was aided by the consistency of their designs, and their coins spread far throughout the known world. The earliest types, like this coin, depict a sea turtle engraved in high relief with an incuse pattern on the reverse. The reverse punch changed over time, starting with eight triangles and progressing to a “mill sail”, then a “skew” pattern, to increase the usable duration of the die.

The choice of a turtle is likely due to their influence as a sea power but perhaps also because the pre-coinage ingots in use in the region were convex in shape and may have been colloquially known as “turtles”.