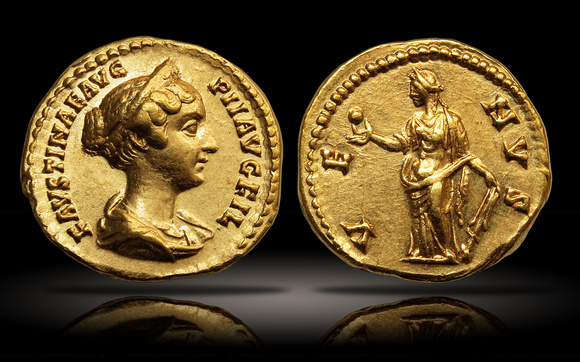 Description pending.
Faustina Junior, wife of Marcus Aurelius (Augusta, AD 147-175). AV aureus (19mm, 7.22 gm, 12h). Rome, under Antoninus Pius, ca. AD 138-161. FAVSTINA AVG P II AVG FIL, draped bust of Faustina right, wearing stephane / V-E-NVS, Venus standing left, holding apple and rudder; dolphin entwined around rudder. RIC (Aurelius) 515 variant (bust type). Calicó 2097 variant (same). Apparently an unrecorded variant and apparently extremely rare. NGC AU 5/5 - 4/5, Fine Style.From The Lexington Collection of Jonathan K. Kern.There are several bust types used on aurei of Faustina Junior. Mattingly and Sydenham, in The Roman Imperial Coinage, classify four varieties. The standard bust type is a draped bust right with head bare. The three variants of this are with bust left, with a band of pearls in Faustina's hair, and with her wearing a stephane. Of these, the latter is certainly the rarest. To further complicate matters, there are three varieties in RIC of this reverse type paired with this obverse legend: one with the rudder set on a dove (RIC 515), one without the dove (RIC 516) and one with a dolphin entwined around the rudder (RIC 517). As there is clearly something at the base of the prow, the current specimen is either an example of RIC 515 or RIC 517. One would want to lean towards the latter number, as it is the only one listed with a sub-variety of the bust type with Faustina wearing a stephane (517b). Nonetheless, looking through examples in Calicó (2094 through 2097d), other auctions, as well as the preceding lot in this auction, it would seem that the dolphin is usually engraved somewhat more prominently. Therefore, we tentatively assign it an RIC number of 515 and note that the bust type is unlisted. However, this type still remains completely unlisted in Calicó's corpus, as he does not have a single example with this bust type paired with this reverse type (he does not include an example of RIC 517b, for whatever reason). Indeed, an examination of recent auctions reveals that not a single example of the VENVS reverse with stephane bust obverse has come to market in at least a decade (including any of RIC 517b; the two that have been attributed to that RIC number (NAC 72, lot 666 and M&M Basel 95, lot 146) were misattributed to 517b when they are in fact 517c). Therefore, it would seem that the present specimen is a completely unlisted variety of an already rare type.
© Colosseo Collection
Powered by ZENFOLIO User Agreement
Cancel
Continue