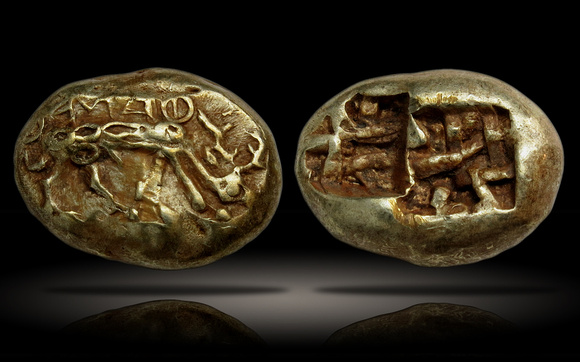 The Badge of Phanes

The concept of coinage rose to prominence quickly and spread throughout the known world, starting in Asia Minor, then to mainland Greece. The popularity and ease of acceptance of this type of abstract idea indicates just how profound and important it was for expediting the development of society. Other major innovations, like the invention of the lightbulb, the clock, and the Internet, have had similar effects on the wide-scale interactions of populations, fulfilling needs which had arisen at a turning point in history.

This particular coin is of the celebrated Phanes type. The stag allows these coins to be attributed to Ephesus as Artemis, the patron goddess of the city, chose the stag as her sacred animal.

Whether they were originally intended to be used to appease the gods, pay mercenaries, or to fund city projects, coins revolutionized commerce. As our modern world becomes increasingly digital, the concepts pioneered by the first coins still comprise the backbone of trade, offering an accessible, neutral medium through which transactions can be processed quickly and fairly.
© Colosseo Collection
User Agreement
Cancel
Continue