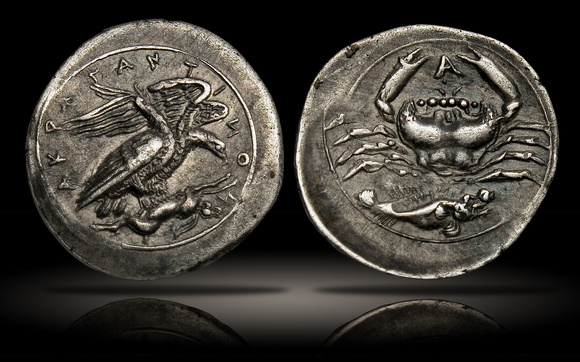 Akragas was a wealthy and powerful Greek state on the southern coast of Sicily, second only to Syracuse in importance. The city was famous for its lavish building projects, proudly displaying its wealth in the form of numerous massive temples, many of which still stand today.

The early designs of the coinage of Akragas remained consistent for nearly a century, depicting Zeus’ standing eagle on the obverse and a crab on the reverse. As their societies matured, the aristocratic rulers of Akragas and its surrounding cities became highly competitive, especially in horse races, but also in the artistic beauty of the coinage they produced, resulting in a flourishing numismatic arms race.

Around 415 BC, a dramatic shift took place, reinvigorating all denominations of their coinage. The designs became much more intricate, and the new coins have been ranked as some of the most beautiful coinage ever produced, clearly the work of the finest Sicilian artists of the time.

This coin is a fractional silver piece in the denomination of an obol, among the smallest of Greek types. It is engraved in the finest style and meticulously detailed, showing a scene executed with great force and realism. It represents a triumph in coin design, made even more impressive when considering the small size of the canvas on which the artist was required to work.

It is clear that the same master engraver was involved with the production of the larger denomination coinages of Akragas as well, with this coin sharing many stylistic similarities with the famous Agrigentum dekadrachm and Skylla tetradrachm.

The scene is composed in a very lifelike manner, avoiding the temptation to idealize the animals, showing that the engravers were not only talented artists, but also carefully observant of nature.

The obverse shows two eagles preparing to feast upon the hare they have just captured. One eagle is shown with open wings, craning down to tear at its prey while the other raises its head in triumph. This scene alludes to verses from “Agamemnon” written by the Greek playwright Aeschylus, the father of the genre of tragedy. The mythological protagonists Agamemnon, king of Mycenae, and Menelaus, king of Sparta, were represented as two eagles feasting on a pregnant hare, an omen foretelling the destruction of the city of Troy.

The reverse likely refers to Akragas’ increasing focus as a naval power. The fresh-water crab is a symbol of the Akragas river and an emblem of the city, with a giant ocean perch (polyprium cernium) shown below.

It is likely that this obol was a special issue as all known examples come from a single pair of dies. The beauty and effort put into even this small coin shows just how proud the Sicilians were of their coinage and to what extent they would go to find the best artists to engrave them, even when the coin wasn't intended for mass circulation. It was perhaps a commemorative piece or handout to boast about their artistic prowess and military strength.

Unfortunately, the omen depicted on this coin came back to haunt the city. The wealth of Akragas was not enough to protect it from the brutality of the Carthaginians, who sacked the city in 406 BC, an attack from which they never fully recovered and which put an abrupt end to this beautiful period of coinage.


Obol (Silver, 0.79 g), c. 410-406 BC. Two eagles standing right on dead hare, the one in front with closed wings and its head thrown back screaming in triumph, the one behind with wings open and head turned down, tearing at its prey with its beak. Rev. Crab with between its claws; below, grouper (polyprium cernium) swimming to right. Basel 263 = SNG Lockett 519 (same dies). Rizzo pl. III, 6 (same dies). SNG Lloyd 829 (same dies). Very rare. Beautifully toned, a superb coin of the finest style. Extremely fine.
© Colosseo Collection
User Agreement
Cancel
Continue