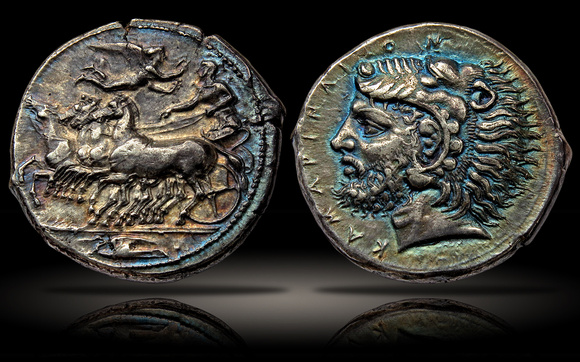 The history of Kamarina, a port city on the southern coast of Sicily, is among the most tumultuous of Ancient Greece. It was founded in 599 BC by settlers from Syracuse and its location allowed it to grow quickly and amass substantial wealth through trade.

However, within forty years of its founding, Syracuse began to perceive it as a threat because of its success. The city was destroyed by Syracuse in 553 BC and then re-founded by colonists from Gela, only to be destroyed again by Syracuse and re-founded for a third time by Gela in 461 BC.

Even with Gela’s support, Kamarina was still weak, leading it to look for stronger allies to defend against future attacks from Syracuse. It sought out the support of Leontinoi until that city was destroyed by Syracuse in 422 BC. It finally reached some semblance of stability through the protection of Athens, but Kamarina approached this alliance cautiously while waiting to see if Athens was indeed stronger than Syracuse.

After producing only small-denomination coins during much of its existence, Kamarina finally began striking tetradrachms around 425 BC and immediately produced a masterpiece. The obverse depicts a vivid example of the Syracusian galloping-quadriga motif, with the reverse illustrating a powerful and mature head of Heracles wearing the skin of the Nemean lion.

The Heracles type was a reference to Kamarina’s Dorian origins and became extremely popular among Greek coinage, eventually serving as the prototype for the design chosen by Alexander the Great on his famous tetradrachms.

This issue continued until 405 BC when Carthage attacked Kamarina and Gela, and the populations of both of these cities fled to Syracuse for protection under the power of the Greek tyrant Dionysios.