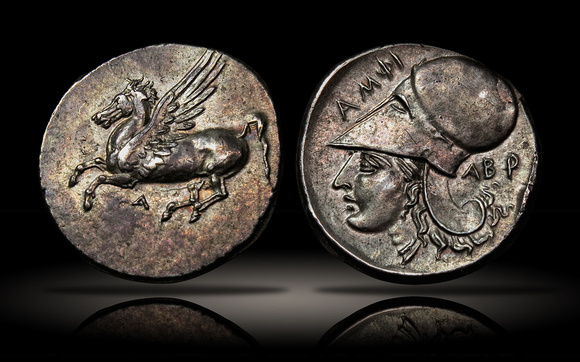 Pegasus, the Winged Horse of the Gods

Among the most recognizable of ancient coins are those of Corinth and its colonies. They feature Pegasus, the mythological winged horse which was born from Poseidon and Medusa. The legendary founder of Corinth, Bellerophon, was given a golden bridle from the goddess Athena that allowed him to tame Pegasus. He then rode the flying horse which helped him defeat the monstrous Chimera, making him the greatest hero before the days of Hercules.

Thinking this battle made him worthy to live among the gods, Bellerophon tried to use Pegasus to fly to Mt. Olympus, but Zeus wouldn’t allow it, stopping the horse and causing it to throw Bellerophon off. Pegasus then remained at Mt. Olympus where he was used to carry Zeus’ thunderbolts and continued to play a role in other Greek tales.

Paying homage to their mythological founder, the staters of Corinth depict Pegasus on the obverse and a helmeted Athena on the reverse.

The Corinthians founded many colonies which copied the coinage of their mother city, differentiated with symbols and inscriptions to denote their origin. Because of the popularity of the coinage, even some cities outside of Corinthian control adopted the design in hopes of improving their trade.

This particular coin was minted in the colony of Argos Amphilochicum on the Ambracian Gulf. It was founded by the mythological figure Amphilochus, a famous seer, who fought against Thebes in the Trojan War. Upon returning to Argos, he was dissatisfied with the state of the city, and he left for Acarnania where he founded Amphilochian Argos.

The relationship between Argos Amphilochicum and their Corinthian control was not without conflict. The Ambraciots colonized the area and adopted the Amphilochians into more formalized Greek culture. However, they later drove out the native inhabitants, who then retaliated by siding with the Acarnanians and Athenians, successfully reclaiming their land.