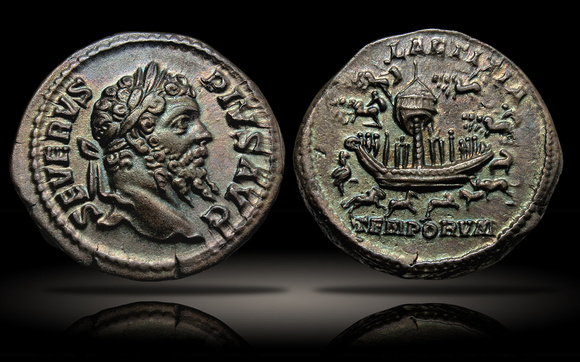 The Secular Games were some of the largest and most memorable celebrations in antiquity. They were held on two different cycles, first on the "saeculum", thought to be the longest possible length of a human life (between 100 and 110 years) and on the centennial anniversaries of the founding of Rome.

Because of frequent conflict, the games were not always held consistently but did occur throughout the history of the empire, with some evidence pointing to the first games taking place in 509 BC. More regular games took place during the Roman Republic in 249 BC and the 140s BC. Augustus held games in 17 BC, and later emperors followed in 88 AD and 204 AD, approximately 110 years between games on the “saeculum” cycle. Claudius also held celebrations in 47 AD to commemorate the 800th anniversary of Rome's foundation, leading to subsequent games in 148 AD by Antoninus Pius and 248 AD by Philip I.

Septimius Severus saw many parallels in his conquests to those of Augustus two hundred years earlier, so he continued the tradition of the Secular Games. These games were lavish and significant with animal hunts as well as chariot races in Circus Maximus. Dio Cassius wrote:

“The whole construction in the amphitheatre was made in the form of a ship, and was so conceived that 400 beasts might be received into it, and at the same time be sent forth from it. Then, when it suddenly collapsed there issued out of it bears, lionesses, panthers, lions, ostriches, wild asses and bison, so that seven hundred beasts, both wild and domesticated, were seen running about at the same time and were slaughtered.” (LXXVII, 4-5).

The inscription on this coin refers to Septimius Severus inaugurating a new golden age, a happy time: “Laetitia Temporum”. This coin appears to depict two different events, the chariot races in the Circus represented by the quadrigae above the ship, and the large animal hunt which took place on the seventh and final day of the games, mirroring the precise description written by Dio Cassius with each animal type visible on the commemorative coins.

The games by Septimius Severus were unfortunately the last on the "saeculum" cycle as 110 years later, Constantine I was emperor, and the games put to an end.

Septimius Severus. (193-211 AD). Silver denarius (3.42 gm). Rome, 206 AD. SEVERVS PIVS AVG, head laureate right / LAETITIA TEMPORVM, the spina of the Circus Maximus decorated as a ship facing left, with the turning posts at its prow and stern, a sail mounted on the central obelisk, and the spina's other monuments visible in between; above the ship, four quadrigas racing left; below, seven animals: an ostrich at left and bear at right; between them a lion and a lioness chasing a wild ass and a panther attacking a bison. BMCRE 343. RIC 274 (R2). Cohen 253 (60 Fr.).]
© Colosseo Collection
User Agreement
Cancel
Continue