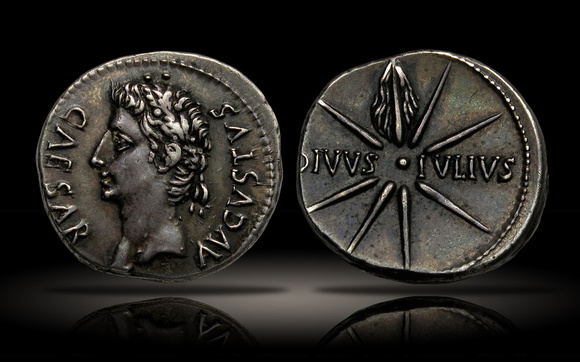 With the primitive technology available to the ancient world, it is understandable that incorrect assumptions would be made of the significance of astronomical events. Most cultures carefully tracked the night sky and believed in the astrological principle that the heavens above affected the earth below.

When something anomalous or unexpected was observed, the ancient people took notice, considering it to be a message from the gods or potentially a sign of impending misfortune. The periodic and irregular nature of meteors and comets made them especially mysterious. The Latin term for comet was “stella crinita” – “hairy star” – and some believed they were wandering planets, whereas Aristotle thought they were the result of gas igniting in the upper atmosphere. Their mystique caused them to be recorded worldwide in historical documents, carvings, and sometimes on coins.

After his assassination of Julius Caesar on the Ides of March, 44 BC, Marcus Brutus realized that, despite the increasingly corrupt and tyrannical actions of Caesar, a large portion of the population resented Brutus’ own actions, considering him to be the murderer of their beloved leader.

In an attempt to gain back favor with the public, Brutus arranged to sponsor the Ludi Apollinares, an annual festival to honor the god Apollo held from July 6-13. Sponsors of the various ludi often spent significant portions of their personal funds to increase their standing in the public eye by making the festivals as lavish as possible. It has been noted that in some years, more than 135 days would be spent at these types of festivals, during which no business was allowed to be conducted.

Despite Brutus’ efforts to improve his negative perception, Caesar’s heir Octavian significantly upstaged him with his Ludi Victoriae Caesaris, the “Games in Honor of Caesar’s Victory”, immediately following those of Brutus, held from July 20-30.

Roman custom dictated that the funeral for elite and powerful members of society was to be celebrated with extensive gladiatorial games. Octavian used this opportunity to not only embarrass Brutus by overshadowing his festival but also to pay homage to his adoptive father Caesar, four months after his assassination.

During Octavian’s games, a spectacular comet, likely the brightest in recorded history, was seen for seven days and nights in the northern sky. Chinese sources confirmed this sighting, and it appears that the comet may have disintegrated as it approached the sun, as it has not been seen again.

Octavian used this well-timed comet to his advantage, saying that it was Caesar’s soul ascending to the heavens. This was sufficient evidence for the Senate to posthumously grant him the title Divus Julius, "the Divine Julius", with the appearance of the comet proving his status as a god. Octavian ordered gold stars to be added to statues of Caesar and evangelized his divinity.

Octavian, being Caesar’s adopted son, was then given the title of “Divi Filius”, “son of a god”. This shaped and defined his reign. It indicated the ultimate expression of Roman power and the fact that all peace, justice, and security came from the emperor who had favor with the gods. This divine right became an underpinning attribute of all subsequent Roman rulers and throughout the Middle Ages for the next fifteen centuries.

This coin was struck in Spain in 18 BC, after Octavian adopted the title “Augustus”. Augustus issued this coin as he was preparing for the celebrations of the Ludi Saeculares, the Centennial Games, which were being held for the first time since deviating from their normal schedule in 46 BC due to the tumultuous political climate.

As was often the case with Augustus’ coinage, this denarius conveys a strong political message. He is shown wearing the “corona civica”, an oak wreath given to individuals who have saved a citizen, or, in Augustus’ case, it represented his saving the entire populace of the Roman world. The reverse depiction of Caesar’s comet is the most detailed comet on any ancient coin, reinforcing Caesar’s and Augustus’ divinity with its inscription.

This coin comes from the Huntington collection, a part of the American Numismatic Society Museum. Archer M. Huntington was one of the wealthiest collectors of all time, assembling an astonishingly complete collection of coins, sculptures, and other artifacts which rivaled that of the world’s largest institutions. In 1905, at only 35 years old, Huntington was nearly finished with the numismatic portion of his collection, having acquired pieces from the pre-Roman period and Roman imperial era through the Middle Ages. He donated a great deal of land to the American Numismatic Society and was president of the ANS from 1905 until 1910, when he became an Honorary President and continued to advise and assist the ANS.

Huntington focused on finding spectacular examples of beautiful coins, and this denarius is no exception.