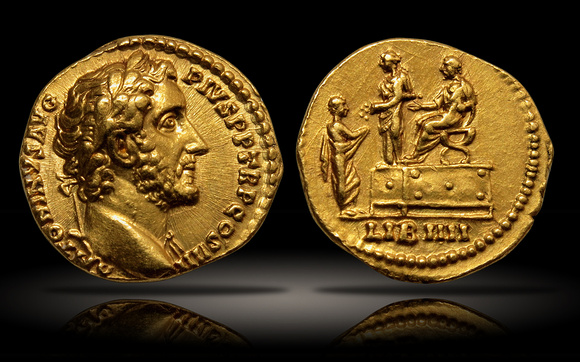 It was common practice in ancient Rome for the emperor to distribute the wealth of the empire back to deserving citizens on special occasions. This engendered trust and solidified the emperor’s popularity, and history makes specific mention of nearly every instance of this imperial generosity.

This coin commemorates Antoninus Pius’ fourth “congiarium”, donations given to citizens. Emperors also regularly donated to soldiers, referred to as “donativa” to distinguish it from that given to the general populace.

The reverse of this coin depicts Liberalitas, the personification of generosity. She was named from the Latin word “liber”, meaning free, and represents the munificence of Antoninus Pius through his giving of coins to the Roman citizen standing near the platform, eagerly accepting the gifts. The coins are being distributed in a cornucopia, a common symbol for prosperity.

It is believed that this particular distribution was in celebration of the marriage of Marcus Aurelius to Faustina Junior in the spring of 145 AD. While Antoninus Pius is generally remembered as frugal, each citizen was given ninety denarii (or three aurei and 15 denarii), and a special additional donative was given to the soldiers.