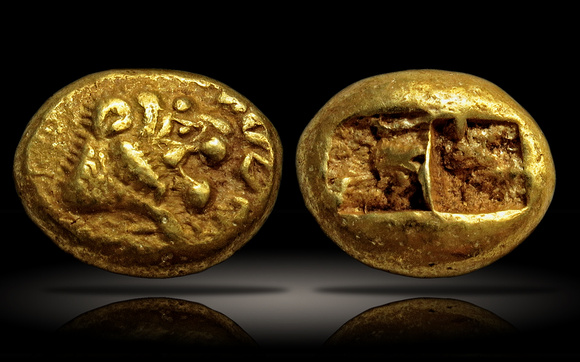 The lion head coinage is among the earliest which can be definitively attributed to the Lydian kingdom. Most of these coins are anepigraphic – without a legend – but a small number contain the inscription “WALWET” in ancient Lydian.

This name is thought to refer to the Memnad king known by Greek sources as Alyattes, who ruled circa 620-564 BC. Through hoard evidence, it is clear that both the inscribed and uninscribed coins were minted at the same time.

Interestingly, all of the inscribed trites and hektes are struck from obverse dies which have far more detail than could fit on the coins. They contain two facing lion heads surrounding the Lydian inscription and are generally struck off-center so that only one of the lion heads is visible with the inscription.

While no larger denominations have been found, it is possible that the dies were originally intended for a larger “stater”, or that there was some significance to striking with one particular side of the die.

This coin features a particularly clear inscription and well-centered head of the left side of the die. These coins are among the first in history to carry an inscription as well as a formal type and are exceptionally rare, with only a small number known today across all denominations.