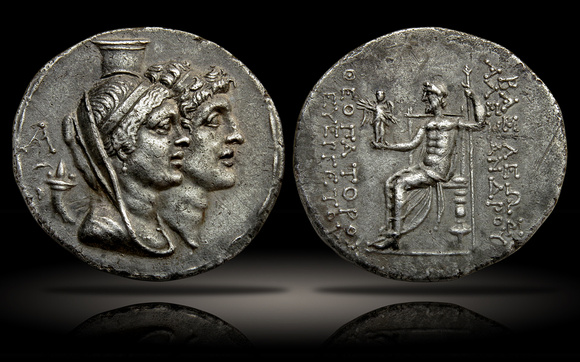 Description pending.
ANCIENT COINS. GREEK. Kingdom of Syria, Seleucid Kings, Alexander I Balas, with Cleopatra Thea (152-145 B.C.), Silver Tetradrachm, 17.04g, 11h. Mint of Ake-Ptolemais, struck c.150 B.C. Diademed and veiled bust of Cleopatra Thea, as Tyche, wearing a pendant earring, pearl necklace, kalathos and with a cornucopiae over her shoulder, jugate to right with the diademed bust of Alexander Balas, A behind heads. Rev. [BA]ΣIΛEΩΣ [A]ΛEΞANΔPOY ΘEOΠATOPOΣ EYEPΓETOY, Zeus enthroned left, holding a sceptre in his left hand and a facing figure of Nike in his outstretched right, who holds a thunderbolt (Houghton & Lorber, SC, 1841; SNG Spaer 1483; Jameson 1715; Boston Supp. 280.
Struck to commemorate the marriage of Alexander Balas and Cleopatra Thea in 150 BC, Which what element to seal the alliance of Ptolemaic and Seleukid Empires. As the sources say: "Then Alexander sent envoys to Ptolemy, king of Egypt, .... Let us now establish friendly relations with one another, so give me your daughter to be my wife, so .... Ptolemy came up from Egypt, with Cleopatra his daughter, and reached Ptolemais in the one hundred and sixty-second year. "
© Colosseo Collection
User Agreement
Cancel
Continue