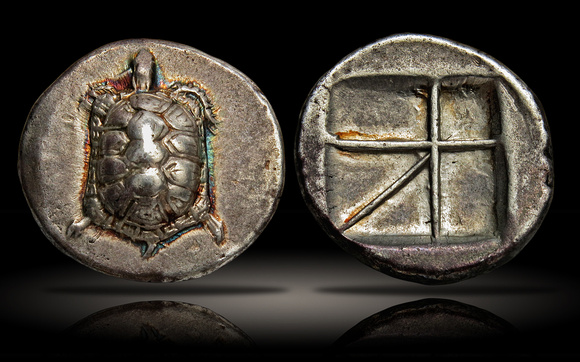 A Changing EconomyAfter 480 BC, Aegina's production of coinage began steadily decreasing as the Athens “owl” tetradrachms increased in popularity. Athens conquered Aegina in 457 BC and, in 431 BC, pushed out the inhabitants entirely, putting an abrupt halt to the turtle coinage.

After Athens lost the Peloponnesian War in 404 BC, the Aeginetans were able to return to their island, but they had lost their supremacy as a sea power and much of their influence. Their coinage of the 4th century BC changed from sea turtles to land tortoises, likely to reflect the shift in the prevailing industry of Aegina. This new coinage was minted in far smaller quantities and was not used as broadly as their previous international trade currency, making them much rarer today.

This coin is of the land tortoise type, specifically the species testudo graeca, and it was minted between 380 and 360 BC. It is engraved in a stunning high relief on an atypically immense flan, perhaps indicating its use as a presentation piece or trial coinage of a new die.