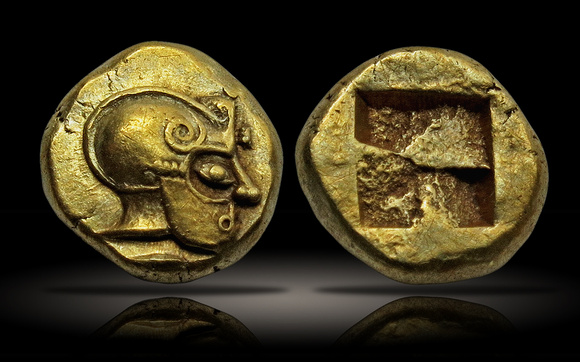 An Anonymous HeroPhokaia was an important coastal city and one of the first mints, producing coinage from early in the 6th century BC until the time of Alexander the Great. Like the contemporary mints in Lydia and Lesbos, Phokaia’s earliest coins were made of electrum.

Their issues from around 600 BC contain about 55.5% gold while coins from the classical period range from 46% in Phokaia to 43% in the neighboring regions. Later coinage continued the decline of gold content, dropping to 40% by the fourth century BC. Even before the complete transition to a bi-metallic currency, it is clear that the mints had discovered how to add silver to the native electrum, covertly reducing the true value of the metal without affecting its perceived worth.

Merchants eventually caught on to the variation in the composition of the electrum, resulting in the necessary standardization of weights and relative values of dedicated gold and silver coinage.

The largest electrum denomination was a stater, weighing about 14.1 grams. One stater represented approximately one month’s pay for a soldier. To facilitate easier trade, fractions were made: a trite (third), hekte (sixth), hemihekte (twelveth), myshemihekte (twenty-fourth), and further into 1/48th and 1/96th staters, the smallest of which weighs only about 0.14 grams.

This coin is a myshemihekte, weighing only 0.66 grams and measuring 6mm in diameter. Despite its size, it represented a full day’s work for a soldier and was undoubtedly treated with care considering its value.

This militaristic type depicts an anonymous warrior, treated as a hero based on the ornamentation of his helmet. There is clearly a head within the helmet, based on the eye which is shown above the side piece, but the fact that the helmeted head is portrayed without a specific identity is intriguing. The obstruction of his features, with only the eye and nose visible, results in a stoic and solemn tone.

This type is listed in the Bodenstedt reference with only four known. Interestingly, it has iconographic similarities to an earlier issue. While the original emission has a simplified helmet design, it is clear that the subsequent coins mimic the first, meaning that this type may hold some special significance to the Phokaians; perhaps it was recognition of the nameless soldiers whose bravery was critically important to their strength as a great ancient power.